It has not been a glamorous year for the Atlantic 10.  A conference that is used to sending multiple contenders each year to the NCAA Tournament is fighting to even get in just two in 2018.  However, despite the struggle, whatever teams do indeed move on from the A-10 will be nightmares to their opponents in a couple weeks.  The Rhode Island Rams, who pushed eventual regional champion Oregon to the final minute in last year’s Round of 32, will be the team to beat.

Rhode Island – it took the Rams until February 16 to lose it’s first game in the conference.  To that date, Dan Hurley’s bunch had been absolutely dominating, rarely even playing a game decided by single digits.  However, since then, it’s been a different story.  The Rams barely escaped in overtime at La Salle a few nights later, and then most recently, got absolutely manhandled at home by St. Joe’s in one of the most eye-popping results in all of college basketball this season.  I don’t think their is too much to worry about in the long run, as long as EC Matthews stays healthy.  However, Rhode Island will most likely not even need the conference title to earn a bid to the dance this year, so it is fair to question their motivation down the stretch.  The Rams are still the best team in the conference, but are vulnerable in D.C. next week.

Davidson – its a shame Davidson struggled so much out of conference, because they have the metrics to be an NCAA Tournament at-large team.  Not all is lost, however, for the Wildcats, who just took St. Bonaventure to three overtimes on Tuesday night.  As usual, Bob McKillop’s crew has the best offense in the league.  Watching this team operate in the halfcourt is an absolute clinic, all facilitated by sophomore point guard Jon Axel Gudmundsson.  Defense has always been a question for Davidson, but since conference play began, their 100.0 defensive efficiency ranks 3rd in the conference and is well below the national average of 105.7.  As the only of the 3 powerhouses in this conference that has no chance at an at-large bid, the Wildcats are highly motivated and extremely dangerous in the upcoming conference tournament. 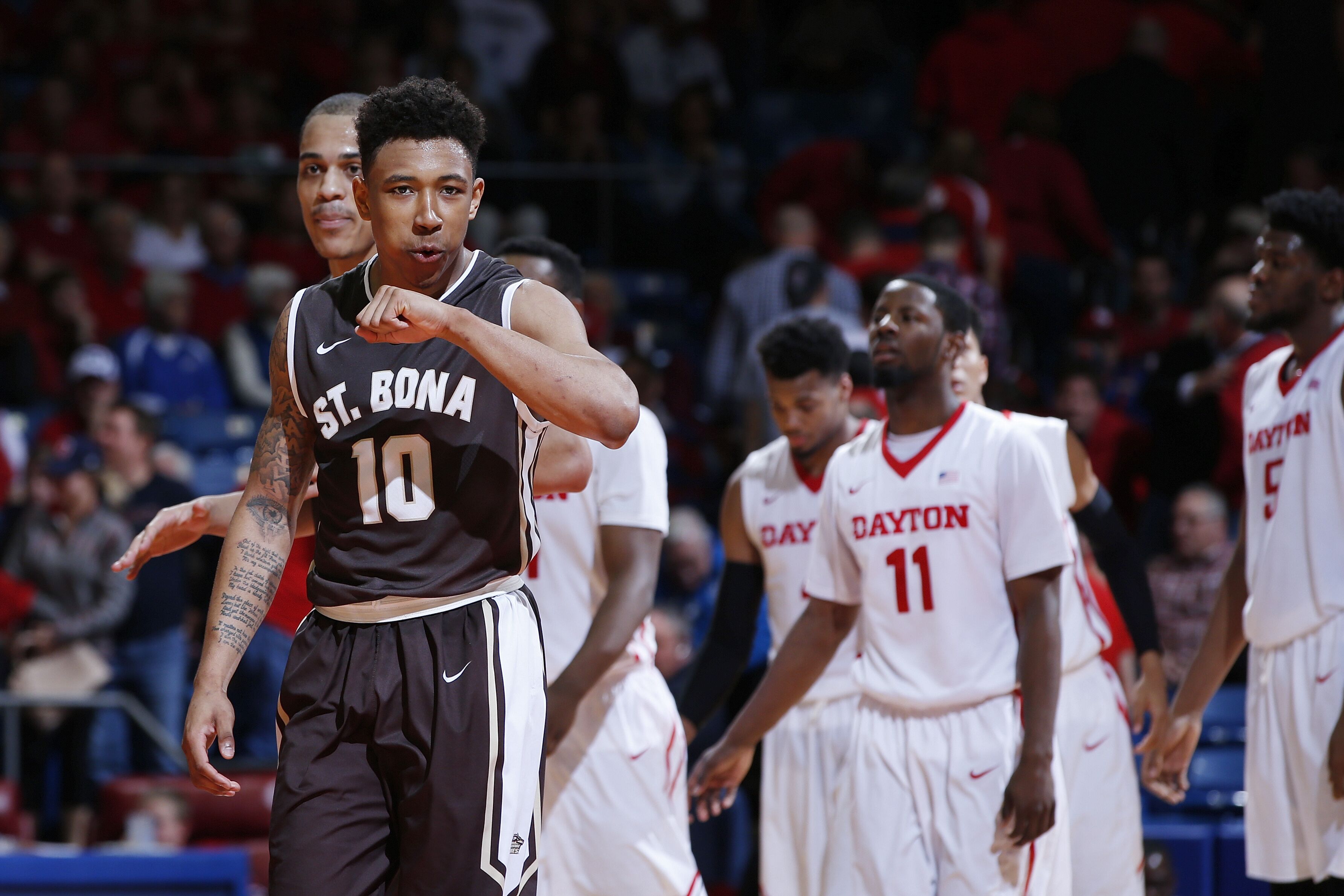 St. Bonaventure – the Bonnies are oh so close to locking up a tournament bid, but cannot let up just yet.  If you follow me on Twitter, you know how big of a fan I’ve been of this team since day 1.  Their backcourt duo of Matt Mobley and Jaylen Adams is one of the best in the country, and the main reason why this team is riding an 11 game win streak, with wins over Rhode Island and Davidson in the process.  Led by Adams, who shoots 47.7% himself, the Bonnies are the best three-point shooting team in the conference, shooting it at 39.6% on the season and an even better 40.3% in conference play.  If there is one area to be concerned with this St. Bonaventure group, it’s on the defensive end.  They have a difficult time defending consistently without fouling, which was a main contributor to their 2-4 start to the conference season.  They will need to put together a decent showing in this tournament to secure a bid, but may not necessarily need the title to secure a spot in the big dance.

Middle of the Pack

St. Joseph’s – you have to give Phil Martelli tons of credit for this turn around St. Joe’s has had in the second half.  Despite being picked to finish third in the conference, the Eagles started conference play losing 7 of their first 11.  However, a recent late surge, capped by a 30-point road win at Rhode Island, has pulled St. Joe’s back into a 3-way tie for 4th in the conference.  They’ve done it all with defense, holding Rhode Island to 48 points in their last game and ranking number 2 in the conference in overall defensive efficiency according to kenpom.com.  Although this team’s talent is inferior to the big three up top, they are extremely well-coached and the most legitimate dark horse of the rest.

Saint Louis – the Billikens have had an excellent turnaround from a year ago under 2nd-year head coach Travis Ford.  However, the unfortunate loss of Jordan Goodwin has made the battle all that much tougher for Travis Ford and his squad.  The Billikens have one of the best defenses in the Atlantic 10, holding opponents to the lowest effective in-conference field goal percentage of the 14 teams.  The issue going into the A-10 tournament will be scoring.   Despite being just a freshman, Goodwin was responsible for the most points (through scoring and assisting) of any player on the team.  His contribution to the offense will be missed.  St. Louis is going to hang around in games, but I’m just not quite sure they have the offensive ability to make a deep run.

George Mason – it was the night of Wednesday, January 31, and the Patriots sat at 3-6 in the conference following a blowout loss to St. Bonaventure.  It is now Friday, March 2, and George Mason has risen from the dead.  Coming off another shocking win at VCU as 9 point underdogs, the Patriots are now locked in that 3-way tie for 4th place in the conference.  Picked to finish 10th in the conference preseason poll, Dave Paulsen was not expected to do much with his team in 2018.  They rank 340th in the country in experience, and play no seniors.  However, Paulsen, in his third year over from Bucknell, has worked his magic and has his team playing their best ball of the season.  It’s tough to know exactly how dangerous George Mason is in the tournament, but I would definitely not want to be one of the teams that is forced to try to figure it out.  You’d probably prefer get to avoid this feisty team from Fairfax, Virginia next week.

VCU – it’s been a disappointing year for first-year coach Mike Rhoades and his VCU Rams.  Picked to finish 4th in the preseason poll, the Rams have really struggled, especially of late.  They’ve lost 6 of their last 8, including losses to George Washington and George Mason.  This is not a way you want to enter the conference tournament, but the VCU Rams do have the talent to turn things around.  Senior forward Justin Tillman is one of the most talented players in the conference, and VCU has shown spurts of good basketball this season, especially on the defensive end.  They are not a threat from three on the offensive end, which has greatly limited their ability to score, and are not exactly careful taking care of the basketball.  My guess is VCU’s tournament run ends the way their regular season did: in disappointing fashion.

Richmond – after a brutal non-conference performance against the 32nd-toughest non-conference strength of schedule in the country, things looked to be turning around for the Spiders.  On February 7th, following their second win of the year over VCU, the Spiders sat at 7-4 in the conference despite an overall record of just 9-14.  But then, things began to unravel once again.  Now, after losing 6 of their last 8, Richmond is in a difficult spot entering the A-10 tournament.  We know they are good enough to bang with the big boys.  Having beat Davidson twice this year, Richmond will have the confidence it needs to compete.  However, this extremely young team may have hit a wall in the grueling college basketball season.  It’s tough to tell how they will perform with new life in the tournament, and I will be watching their first round matchup very closely to see whether Jekyll or Hyde shows up in D.C.

La Salle – the Explorers have played well since B.J. Johnson’s return to full health, particularly at home.  However, now they have new injuries to worry about.  Both Pookie Powell and Isiah Deas did not play in their last contest, leaving folks to wonder whether or not they will be ready for the conference tournament.  John Giannini’s crew has been a middle of the pack team all year long, playing at a fast pace without many great strengths or glaring weaknesses.  This team is not a threat to win the tournament, but can win a game or two dependent on the draw and some luck with their injuries.

It Would Take a Mini-Miracle

Dayton – the biggest disappointment in the A-10 this season, Dayton is just not a very good basketball team.  A year removed from Archie Miller’s departure for Indiana, they’ve had their share of home success, particularly early in the year, but have been absolutely putrid away from their home floor.  Their defense is terrible, ranking 13th of 14 teams in the conference, which will not translate well onto the neutral floor next week.  The Flyers may very well be a one-and-done team in the Atlantic 10 tournament.

George Washington – the Colonials have put together a bit of a run down the stretch, albeit against a pretty favorable schedule.  Their offense, which struggled for much of the year, has put up 80+ points in 4 of their last 7, including dropping 103 on Richmond a couple weeks ago.  Senior forward Yuta Watanabe has been filling it up, and if matched up against a smaller bunch, could be an absolute nightmare in the early stages of this tournament.  Watch GW to be an early round sleeper playing close to home in Washington.

Duquesne – they’re buried deep in this article, but the job Keith Dambrot has done with the Dukes in his first season cannot be overlooked.  Duquesne was pretty much unanimously picked to finish last in this conference coming off a 10-22 season a year ago, but has really held their own this year.  They started the conference season 5-2, and although they have struggled down the stretch, appear to have a bright future moving forward.  As far as this tournament goes, it will be important for opponents to guard the 3-point line against the Dukes.  Duquesne likes to fire away from beyond the arc and does a pretty good job of getting to the free throw line.  They have snuck up on teams all season long, so it would not shock me if they were competitive in the tournament.

It Would Take a Major Miracle

Massachusetts – losers of 11 of 12, the Minutemen are all but cooked.  This team plays absolutely no defense, and lost one of their best players, Rashaan Hollway, for the season about 10 games ago.  It’s been a really difficult year for Matt McCall and company that will likely end with a first round exit from the conference tournament.

Fordham – another team not expected to do much this year, the Rams have at least been competitive from time to time.  Although they just do not have anywhere close to the offensive ability to be able to make a run in this thing, Fordham does have some experience and will at least fight in their first matchup.  The Rams will more than likely be flying home early.

Who wins this cereal bracket?